In order to start viewing a task, you should press with the left button of your mouse on its subject in the list. The window of task viewing shown in the screenshot below will appear, as soon as you do it. 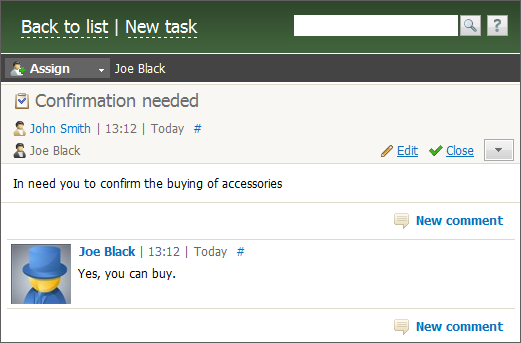 A task can be divided into two parts for convenience: the task itself and attachments.

You can assign the task to other users by pressing the

button. The assigning window will appear, as soon as you press this button. The instructions of how to manipulate it are given in the "Interface Description -> List of Assigned" section. The users/groups already assigned are shown to the right of the "Assign" button.

The task type (via icon), subject, author, the date of creation or editing and the deadline are shown below. If the

icon is displayed to the right of task type, it means that the task is private.

The # sign with a number is displayed to the right of the date of adding task or comments. It is a permanent link to the task or comment in it. This link can be copied via the context menu and inserted to your messages.

, you can prepare a task page for printing. A click on it opens a form to be printed using standard browser means.

To translate the text of the task to other languages, use button

Tasks linked to a project are marked with the icon

and a link to the project. The link text is the same as the project name.

Complete buttons fulfill functions described in the previous section. The expanded list of actions will appear, if you press the

The following commands are available:

The task content is located below. The comments to the task (if any) and search through comments are located under the text of the task. You can write a new comment by pressing the

New comment button. The window of the message editor appears, as soon as you press it.

The buttons of possible actions will appear to the left of the name of the comment author, if you put the cursor over it: edit, delete, reply. The "Edit" and "Delete" buttons appear only, if you are the author of this comment.

The message editor window will also appear, if you press the "Reply" button. However, its text area will already contain the quotation of the commented message limited with dotted line:

The text of the closed task is displayed on a gray background. 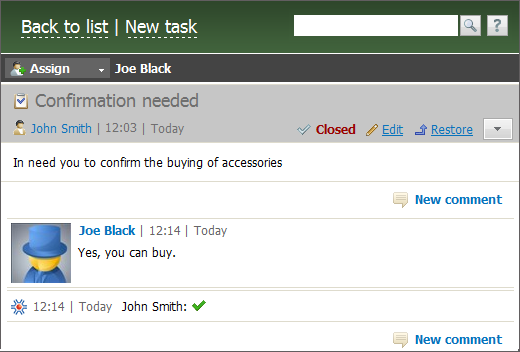 Return button, for example: in case of the task is not completed in a befitting way and the revision is necessary.

The corresponding comments are generated automatically if the list of the assigned users was changed or the task was closed or returned:

The name of the author that modified the task is displayed first. After that the icon representing the performed action itself is displayed:

If a task contains attached files, you can copy them to the "Documents" module right from the task-viewing mode by pressing the

button that appears to the right of the attached file name when you put the mouse cursor over it. This function is available if you have access to the "Documents" module.